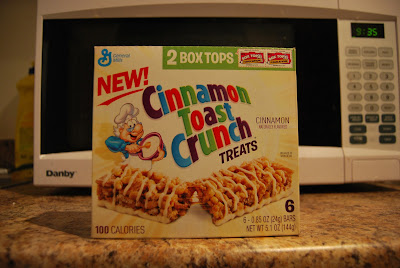 If you're no stranger to the these sugar-laden cinnamon-battered cereal squares you've either eaten enough of them for your dentist to want to yank your head off and mount it on his wall like a prized trophy or you're a parent of a child who's eaten enough of them to keep your local dentist office in business. Either way, you've come across them.

The cinnamon pretty much dominates most of the other aspects of the treat. The other notable presence would be the sugary flavor, which does feel like a tad much, but I'm a fan of junk-food so it was tolerable. However, the overtly sugar-cinnamon-y taste may be overbearing for those not big on foods that will rot their teeth to its raw nerve.


These treats come at 24(g) per bar. They're not as messy as the cereal version where you're getting the sugar and cinnamon powder all over your fingers, and the nice-crunchy texture compliments the flavor well. Overall, I was SLIGHTLY disappointed that the cinnamon presence was so strong (almost nauseating),  not really allowing any of the other flavors to flourish, but its still satisfying enough to NOM NOM NOM through each bar like the Cookie Monster during his lunch period. Pick these up if you're fan of the Cereal... and get ready for the overinflated dentist bills you'll likely incur. ;)